I actually have three different things I considered writing about today. One was another post about the effect of moving 500 miles away from everyone you know and losing contact with all of them. This was brought to mind after a place I worked at in Cincinnati appeared in a dream. It seemed a little sad, so I opted not to do that one today. One was a whiny post about views on the blog, but I figured no one really wants an inside baseball post about how my views have gone down and I think it is because I have to share to a page and people aren’t seeing the page.

The winner was inspired by seeing the following in my TimeHop: 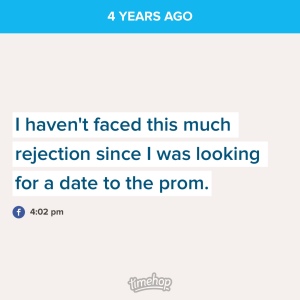 This post was prompted by a few rejections for jobs. I think it’s funny, but it’s not entirely accurate. I was only rejected for a prom date once. I was only rejected once because I only asked one person. I only asked one person because I was not someone for whom doing something like asking someone out is easy. I was a socially awkward little weirdo who was sure that no one would ever say yes to me. It is a miracle that I ever asked one person. It wasn’t going to happen a second time.  There was no way I was going to go through working up the nerve to do that again only to be told no. I went to prom alone. I only danced a couple of times when two of my neighbors took pity on me and asked me to dance with them. I generally hid from rejection by not asking in the first place.

Adult, married Tater is still a socially awkward little weirdo. I still try to cover it up with humor and sarcasm. I have also developed a pretty good fake inflated ego as a new twist to my cover-up. I’m not sure anyone is fooled. Not being in the dating game makes it a little easier. I can’t imagine ever having to go through getting up the courage to ask someone out again. I need to make sure I am always extra nice to Mrs. Tater.