A long time ago I read a book called Practical Demonkeeping by the aforementioned Christopher Moore. I could lie and say that the book stuck with me and that started my love of the books, but I won’t. I apparently forgot I read it because a few years later I was working at the library here in Maryland, stumbled upon the book and thought it sounded good. I checked it and started reading it. I thought it seemed familiar at first but it took about half the book before I realized I had read it before and had liked it.

Flash forward a few years and I pick up a book by the same author called Bloodsucking Fiends: A Love Story. I really liked the book and noticed when I looked at the author page he had his email address listed. I decided to write him a note to tell him I enjoyed the book. I wasn’t expecting an answer, but I got one. I have no idea how or why I ever emailed him again, but I do know we exchanged a couple of emails before I ever met him in person. I eventually went to a signing he did in Baltimore. At the signing, he asked if any of us were people he had talked to via email. I raised my hand, he actually remembered me and then I was very awkward when I actually talked to him one on one.

Apparently, I was not the only weird person who had started emailing him. There were so many of us that he set up a bulletin board on his website so we could talk amongst ourselves and also to him. This coincided with me working alone, so the board was a place I used to have people to talk to on my breaks at work. Eventually, there was another Chris Moore signing in the area. I picked up one of the strangers in Catonsville and we drove down to northern Virginia together for the signing. Several others from the board were there/ It became a regular thing for a group of us to meet for dinner before a signing. Chris started saving seats for us at some of the venues. He gave us all Fool hats at one of them.

The last signing I was able to attend was in Baltimore. I was lucky to be friends with people who had a much closer friendship with Chris and they had made plans to meet him for lunch and I got to tag along. We had a nice lunch and then drove up to the signing. As far as I know, he has not come back to the area. I’m not sure if these two things are related.

So, from a random email to an author I am now friends with him on Facebook, have had lunch with him and have made friends with other people via our love for his books. NOt a bad outcome for a simple thing like an email. 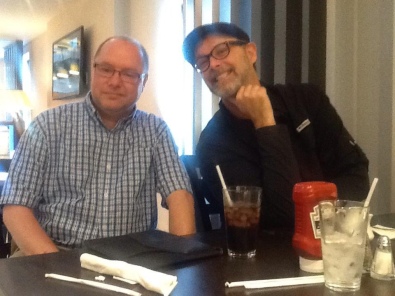 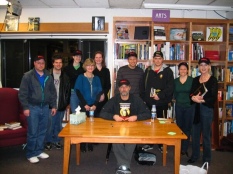 6 thoughts on “My Long History of Stalking Christopher Moore”