If you read my last post, you know that I was heading out-of-town last week and was stressed out over the impending snow storm. The day of that post, the snow storm was heading in and Amtrak did indeed cancel some trains. I was originally rebooked on a train for the next morning, but my wife suggested I go ahead and rebook for that night and pay for an extra night in the hotel to beat the storm. I was able to rebook and headed out Tuesday night. My train was an hour late, but I made it to my hotel around midnight. It was good I did that because several people did not make it to town the next day due to more canceled trains.  I was there for the Public Library Association Conference, but I will not go in too much detail on the actual conference because I made the decision years ago that this blog would not be a library blog.

Wednesday morning I woke up early because that’s what I do. My breakfast plans were ruined because Reading Terminal Market was closed for the storm so I headed across the street to the Dunkin Donuts. It was still a mix of precipitation at that point. I waited a little while for it to turn to snow and headed out for a walk. It was cold and snowy, but I enjoyed being out of the room. I walked to Rittenhouse Square and then down to City Hall and back to the hotel.

After the walk I met some friends and we walked over to Chinatown for lunch where I had soup dumplings for the first time. 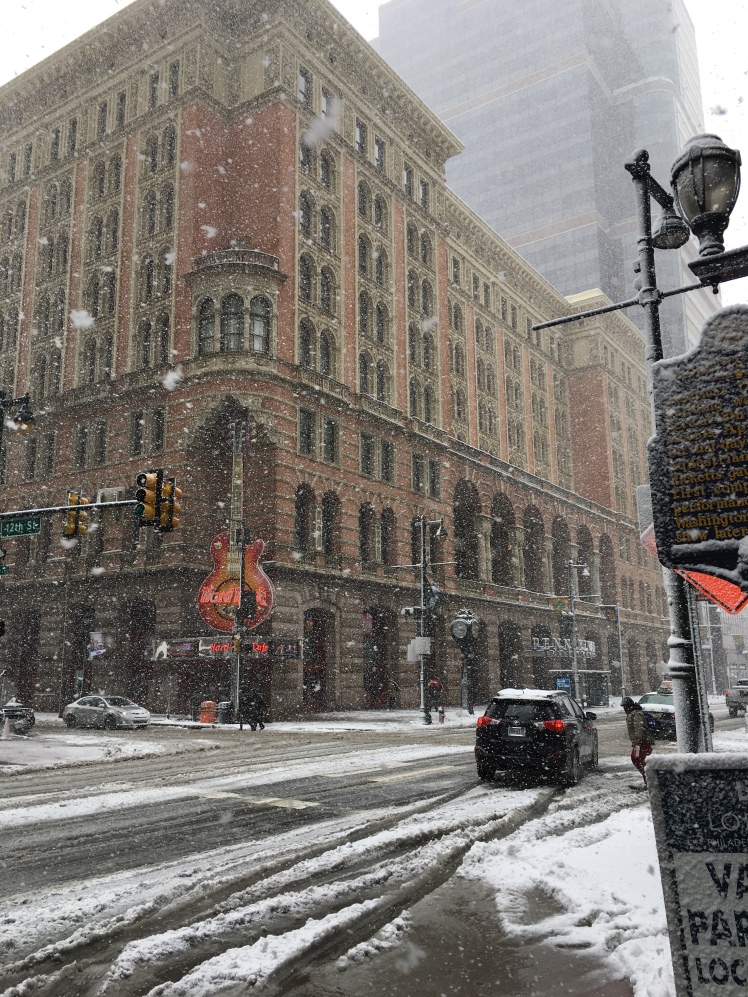 The next day I had a little bit of time before my first session so I took another walk in the snow to see some of the historical area. I was able to see a little, but most of it was still closed off for snow removal. I was able to get a couple of pictures and then headed back to the conference.

I made it to Reading Terminal Market for lunch which was a good thing because that was the last time I walked in and felt like the lines were not too long. The place was crazy the rest of the week. That night I had a ticket to a fundraiser called Throw and Axe for the Stacks. It was at a place called Urban Axes and it is all about throwing axes. I was a little nervous about this. Not because of the axes, but because I would know no one at the event and was riding up with people I would meet for the first time on the ride. I turned out to be a fun night and as my daughter said when she saw the video I was weirdly good at throwing axes.

After another day of classes, I went to dinner with an old friend. Well, she’s not old, but makes me feel old. I’ve known her since she was in 6th grade and I was an adult already. She’s now an adult and living in Philadelphia with her husband. I did not get a picture with her. I did take the below picture of a tree from the seed that was taken to the moon that we passed as we walked to the restaurant. The walk was a very nice walk from my hotel through old city. The restaurant was Chloe Byob and was the best food I’ve had out in a long time. The company was also very good. Now the tree

A few more pictures – An art piece at the convention center, the view from the top floor of the hotel(my room looked out at an office building) and another general city shot: 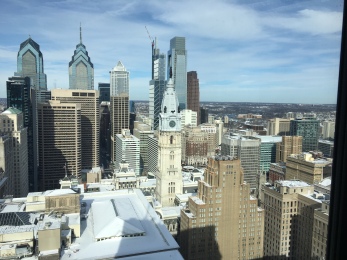 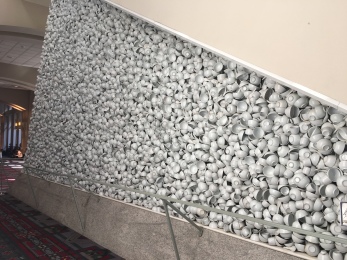 I had a cheesesteak at Steve’s and then headed back to take the train home.

After the stress of getting there it was a good week. I was exhausted from all of the social interaction, but I learned a lot and feel good about stepping out of my comfort zone.

12 thoughts on “My Philly Adventure”